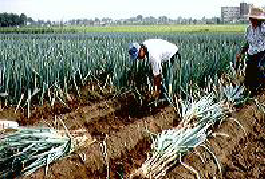 Allium fistulosum is a type of onion that has a long white stalk that connects an elongate bulb, not much thicker than the stalk, to long, hollow, tube-like leaves. Allium fistulosum are called Negi in Japanese, and are known by a number of names in English. These include Welsh Onion and Japanese Bunching Onion. Allium fistulosum grown in Koshigaya are called Koshigaya-Negi, and are known for having a strong stalk that does not break into pieces during cooking. Although it is unknown exactly when such high-quality Negi were first cultivated in the Koshigaya area, there is documentation suggesting that it was during the Edo Period (1603 - 1867). Koshigaya City’s administration has encouraged the cultivation of Koshigaya-Negi in Mashimori, Nakajima and other areas of the city, where there is farmland surrounded by natural embankments, and much farmland in these areas has been converted into Negi fields. Koshigaya City is now well known for its Negi, and ranks with Fukaya City as a famous Negi-producing area. 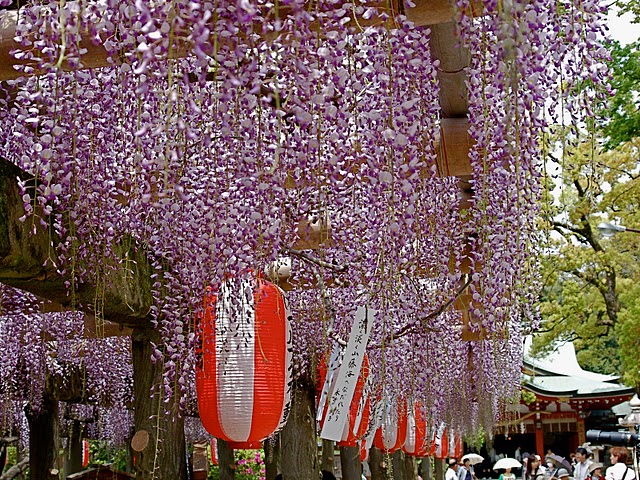 In Japan an early Spring is expected this year. Any mention of Spring reminds me of Cherry Blossom time in Koshigaya. It also brings back memories of our ‘homestay’ with Mr. and Mrs. Kobayashi-san at the Hisaizu Shrine residence on the Sister City (Adult) visit in 2000. One of the simple pleasures at that time was walking through the tunnel formed by the 200 years old plus Wisteria. The old plant grows over wide trellises by a pond (full of turtles).

Now a Koshigaya Natural Treasure, this plant when already about 50 years old, was supposedly transplanted in 1857 from Nagareyama in now Chiba prefecture to Koshigaya by Kawanabe Kunizo. This was done to honour an influential scholar and leader, Hirata Atsutane. In ancient Japan, Wisteria floribunda was planted in the palace where the ladies –in-waiting lived.

Empress Fujiwara no Shoshi, 1000 CE was called “Fujitsubo” because of the Wisteria growing in the palace courtyard. This was probably because the common name for Wisteria at that time was ‘Fuji’. Hisaizu Shrine is a major attraction in a local festival from April 28 to May 6. 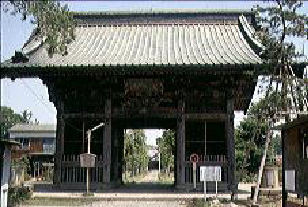 Daishoji Temple was built in 750, and is located in the Koshigaya City's Osagami area. It is widely known as “Osagami Fudo.” The temple's gate is about 200 years old, and displays a tablet that was handwritten by Sadanobu Matsudaira, a senior official in the Tokugawa Shogunate 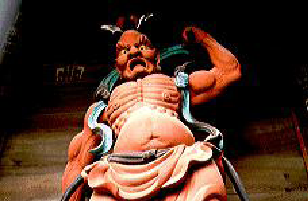 . The gate’s roof was originally covered in clay tiles, but is now covered in copper ones. Also, the temple’s grounds contain a magnificent Tabunoki, an evergreen tree of the Lauraceae family. The Tabunoki is about 500 years old, is about 8 meters tall, and has a trunk 4 meters in circumference.